CBD: Should It be Used on the Backstretch?

In March of 2018 when the ground around Ontario was frozen solid as a rock, Warren Byrne took a nasty spill.

He had just hopped on a hot-headed unraced 3-year-old gelding when it took off blindly. Byrne was pitched onto the hard ground, breaking his upper arm–an extensive fracture that required a plate and seven screws.

After the surgery, doctors warned Byrne that he was suffering bone-density issues from a medication he had long taken, describing the problem as being akin to early osteoporosis. He also reacted badly to the prescribed opioid painkillers, and instead, was given a set of cannabidiol (CBD)-containing products to manage the pain.

At the nine-week follow-up, the surgeon looked at Byrne's X-rays and laughed. “He said, 'get the hell out of here. You have enough bone regrowth here I could take some out and give it to my next patient,'” recalled Byrne. A little more than two weeks after that, Byrne was back on a horse.

A former bloodstock agent and show jumper, Byrne ascribes the rapid turn-around in his bone density problems to CBD, and was so enamored with the part it played in his convalescence, he started his own company called CannaHorse, which gears CBD products to the horse community.

His fledgling business–recently invested in by animal health giant Bimeda–capitalizes on the fast-growing popularity of CBD in human use to treat a score of common problems besides fractures, including arthritis, anxiety, and inflammatory diseases. Athletes are using it to manage many common physical stresses that come with high-level training and performance.

The rollout of CBD products in the world of equine athletes has been rockier, due mainly to a lack of hard research into its effects in horses and in the longevity of CBD and its metabolites in the horse's system. That, and the U.S. Food and Drug Administration (FDA) has approved it only for human use.

Just recently, a CBD positive in California prompted the California Horse Racing Board (CHRB) to issue a memo to trainers warning of the consequences of CBD use, especially in a marketplace that's currently largely unregulated.

“You have to be really careful when you use these herbal products because you really don't know what's in them,” said CHRB equine medical director Rick Arthur. “And there are products out there that have CBD in them that they may not be aware of.” 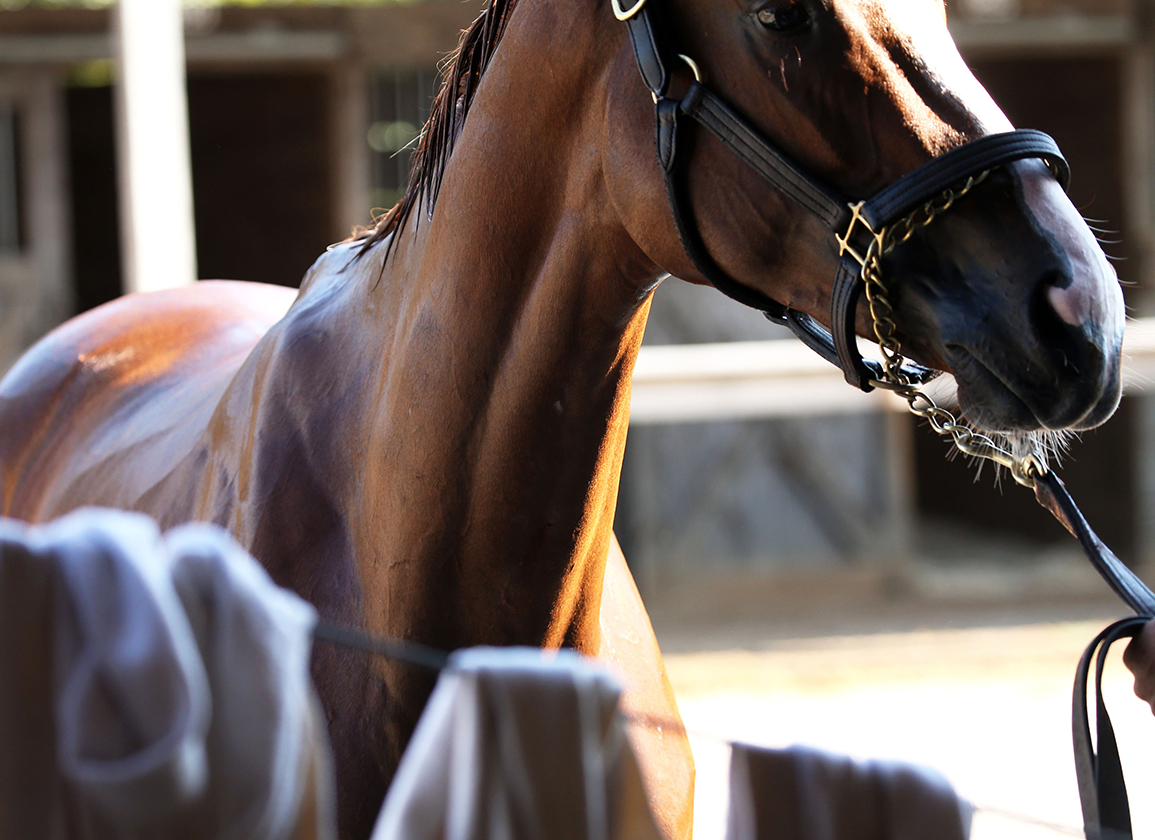 But Byrne said he believed that as the rules surrounding the use of regulated therapeutic medications continue to tighten in horse racing, and as the scientific literature behind CBD continues to grow, CBD could provide a useful alternative tool to manage the typical aches, pains, and stresses of training and racing.

“As more and more people are starting to see cannabinoids are medically beneficial, I think we're hopeful this becomes a holistic issue for horses,” he said.

While derived from both marijuana and industrial hemp plants, CBD is not responsible for any intoxicating effect. What it does is stimulate the endocannabinoid system (ECS), described as “one of the most important physiologic systems involved in establishing and maintaining human health,” impacting as it does things like sleep patterns, mood, memory, appetite, and fertility.

Endocannabinoids–molecules made within the body–and their receptors are ubiquitous throughout the brain, organs, connective tissues, glands, and immune cells.

CBD already has its foot firmly in the door in the human sport's world. In 2018, the World Anti-Doping Agency (WADA) approved its use in athletics, and many international sports federations, said Byrne, have followed suit.

Indeed, leading lights from the worlds of UFC, golf, and track and field tip their hat to CBD use. This year's Olympics at Tokyo will be the first time athletes will be legally permitted to use it at the games. But at present, equine sports have largely pressed the handbrake.

In May of 2019, the U.S. Equestrian Federation (USEF) prohibited CBD and CBD metabolites in competition, warning that CBD products are likely to affect the performance of a horse due to its reported anxiolytic effects, which are those related to anxiety and stress reduction. “This substance is no different than legitimate therapeutics that affect mentation and behavior in horses,” the federation wrote.

Its burgeoning use prompted the Racing Medication & Testing Consortium (RMTC) to issue a cannabidiol bulletin in 2019, warning of some of the risks from CBD use in racehorses, especially when it comes to the threat of a positive finding, the consequences of which are not inconsiderable. The Association of Racing Commissioners International (ARCI) currently lists CBD as a class 2 category B penalty.

While CBD products are required to contain less than 0.3% tetrahydrocannabinol (THC)–the main psychoactive ingredient in cannabis–poor regulatory oversight of the CBD market means that some contain much more THC than that. The ARCI lists THC a class 1, category A substance. 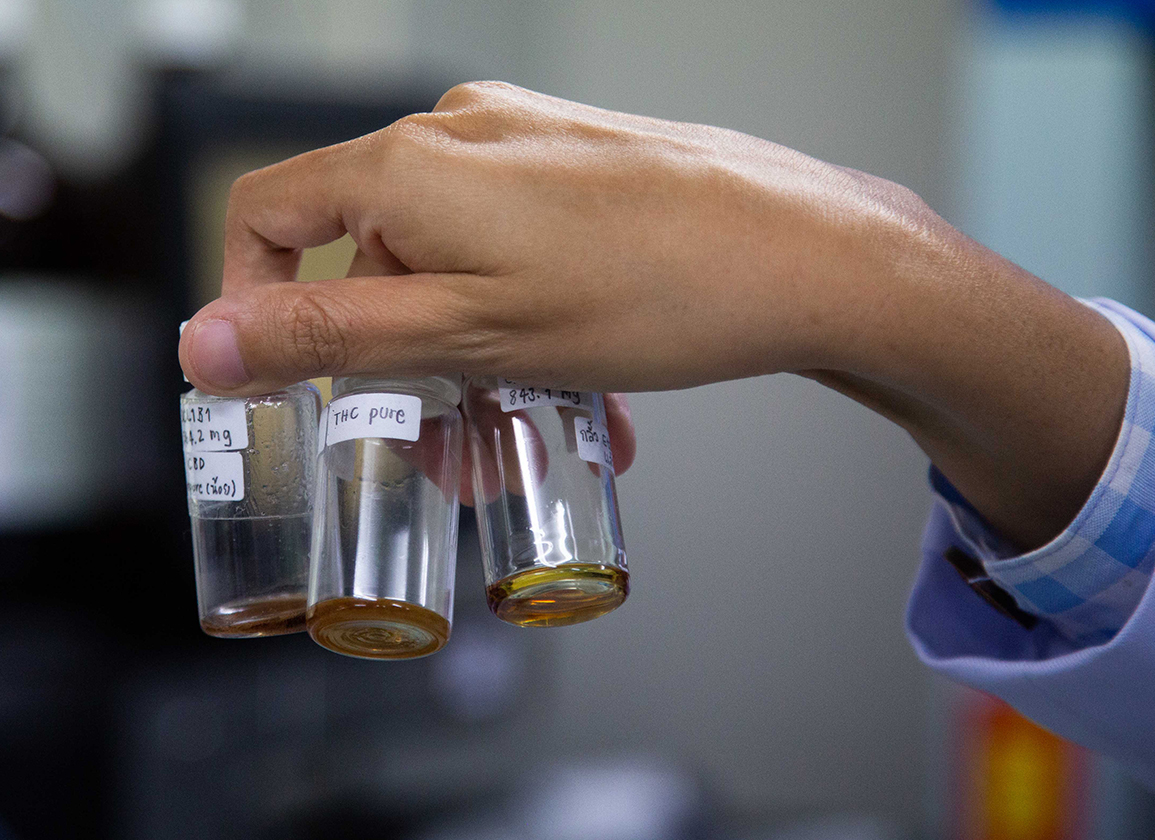 Among some of the research conducted in small animals, CBD has been shown to potentially ameliorate anxiety in rats and osteoarthritis in dogs, and even help reduce the frequency of seizures in dogs. As for horses, the RMTC release noted how at that time, “no peer reviewed published research was identified that evaluated the effects of CBD.”

Since then, however, researchers out of Murray State University in Kentucky have studied the pharmacokinetics–the behavior of the drug in the body–in Quarter Horses fed pellets containing CBD up to a maximum of 250 milligrams.

They found that after 12 hours, none of the horses had levels of CBD above the lower level of quantitation. The results suggested a peak concentration in the system after two hours.

This March, a group of researchers from U C Davis published a paper showing the drug's behavior in Thoroughbreds administered oral doses of CBD up to two milligrams per kilogram (mg/kg).

They found that in the majority of cases, CBD was below the level of quantitation at 72 hours, but that two common CBD metabolites were above that level at that same point in time, suggesting that certain CBD metabolites are going to be an important factor in determining any future CBD product withdrawal time for competition.

While neither study found any negative behaviors or effects from CBD in horses–including any gastrointestinal or cardiac issues–Arthur said the findings of the UC Davis study shows how ingredients that remained in the blood had an inflammatory effect at 72 hours.

Indeed, this recent University of Kentucky study found that CBD appears to have an anti-inflammatory effect in senior age horses.

Arthur said that this effect could “conceivably” lead to questions of equine welfare and safety.

“All we're saying is that drugs have an effect longer than you can measure the drugs,” said Arthur. “EPO's probably the best example. We can find EPO for 48, 72 hours at most. But the effect lasts for weeks, possibly months.” 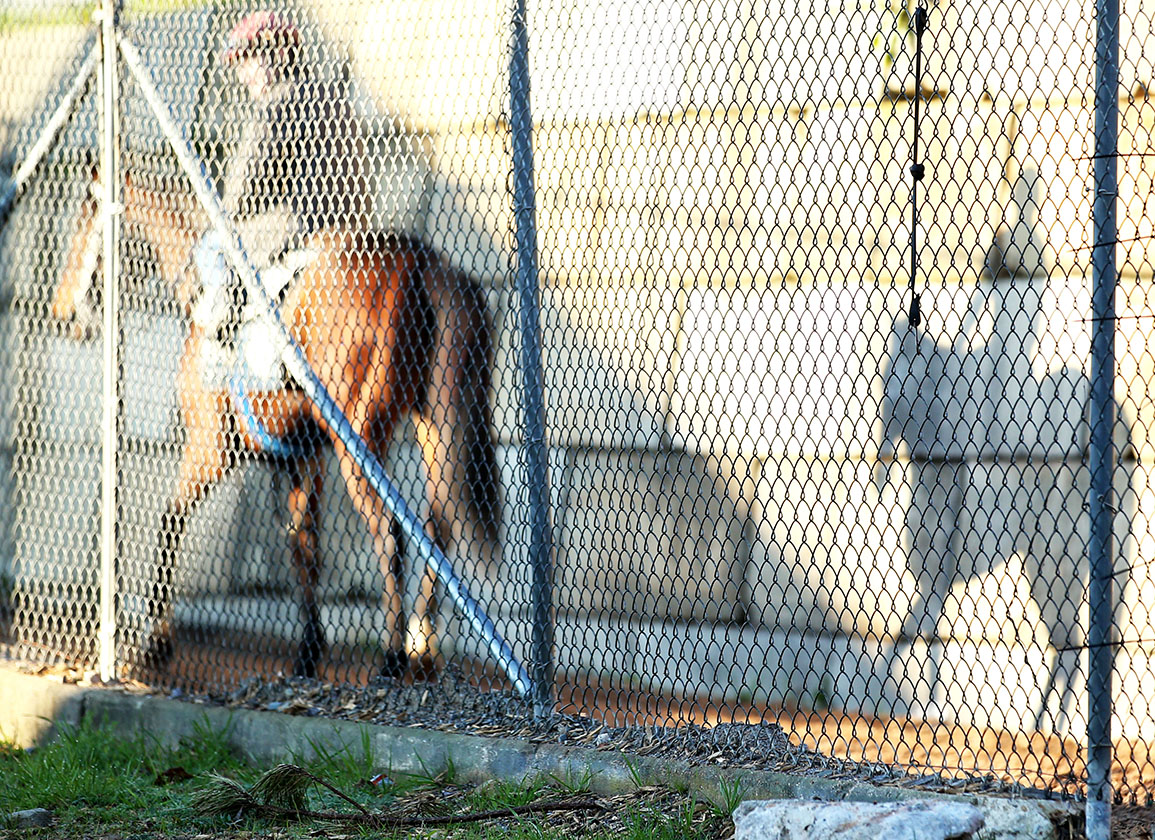 The overall science, however, behind CBD use in horses is still noticeably scant, which is why CannaHorse conducted its own private study in Prague in January looking at the effects from low doses of CBD administered orally to horses.

The data's still being processed, said Byrne, but he was able to share how CBD did not trigger gastrointestinal problems, cause sedation, harm the liver, or change blood pressure and heart rate outside of usual ranges. In this regard, “it has lined up with all the other studies that have been done,” said Byrne.

Unlike some of those other horse studies, however, those tests conducted in Prague suggested CBD helped calm the horses and reduce anxiety, said Byrne.

The results of the January study precipitated the launch of their first product, called Equilibrium, for which the company has earmarked further research.

One planned study will seek to see if it has any calming effect on horses boxed up and vanned for three hours. Another is a fracture healing study, geared around horses with bucked shins. The other will test the product's CBD elimination time, including metabolites, from the horse's system.

Testing concerns aren't just driven by the uncertain elimination times. CBD products are largely unregulated, leading to much variation in purity, consistency, and safety. Indeed, inconsistencies in concentration are said to occur frequently even among batches from the same manufacturer.

Byrne, however, swears that his products–designed, he said, by a team of equine science specialists–are created in such a way they maintain their quality and consistency to a much higher degree than others.

Using a manufacturer in California, he said, they isolate only “pharmaceutical grade” cannabinoids and terpenes, another part of the hemp plant with therapeutic properties.

“When we combine them, we're able to create a very repeatable product, which is very rare in cannabinoid medicine,” said Byrne.

Because of this consistency, Byrne said that he's confident CBD in Equilibrium can be eliminated from the blood within 48 hours. However, “The million-dollar question is: Can we get the metabolites to clear that quickly? That I can't tell you,” said Byrne. “When it comes to withdrawal times, that's what we really need to [focus] most of the further research on.”

Given these hovering question marks–and the potentially serious consequences from a CBD positive–Byrne said that he treads lightly when discussing his products to figures in racing. “I have not spent much time pursuing the racing world,” said Byrne. “Having this around the racetrack is probably not something I want to be pushing at this point.”

That said, Byrne does push back against claims in some quarters about the ease with which the use of CBD products in humans is said to possibly lead to inadvertent positives in horses via skin-on-skin touch.

He pointed to a human study showing how the topical application of a THC-containing product didn't trigger a positive finding in blood or urine.

“One of the popular products for people who want the pain relief, but they have to be careful of passing the drug test, is topical THC,” said Byrne, who described topical THC as a much stronger analgesic than topical CBD. “People will use it because it does not break the blood barrier, unless there was an open wound or something.”

Arthur, however, is more circumspect. “This is all relatively new,” he said. “We don't know all the ways horses can be exposed with CBD.”

Arthur added that one of his colleagues at U C Davis believes “it may be possible if someone smoked marijuana in close proximity to a horse, you might be able to [transmit] some of these cannabidiol metabolites. But we don't know that for certain.” 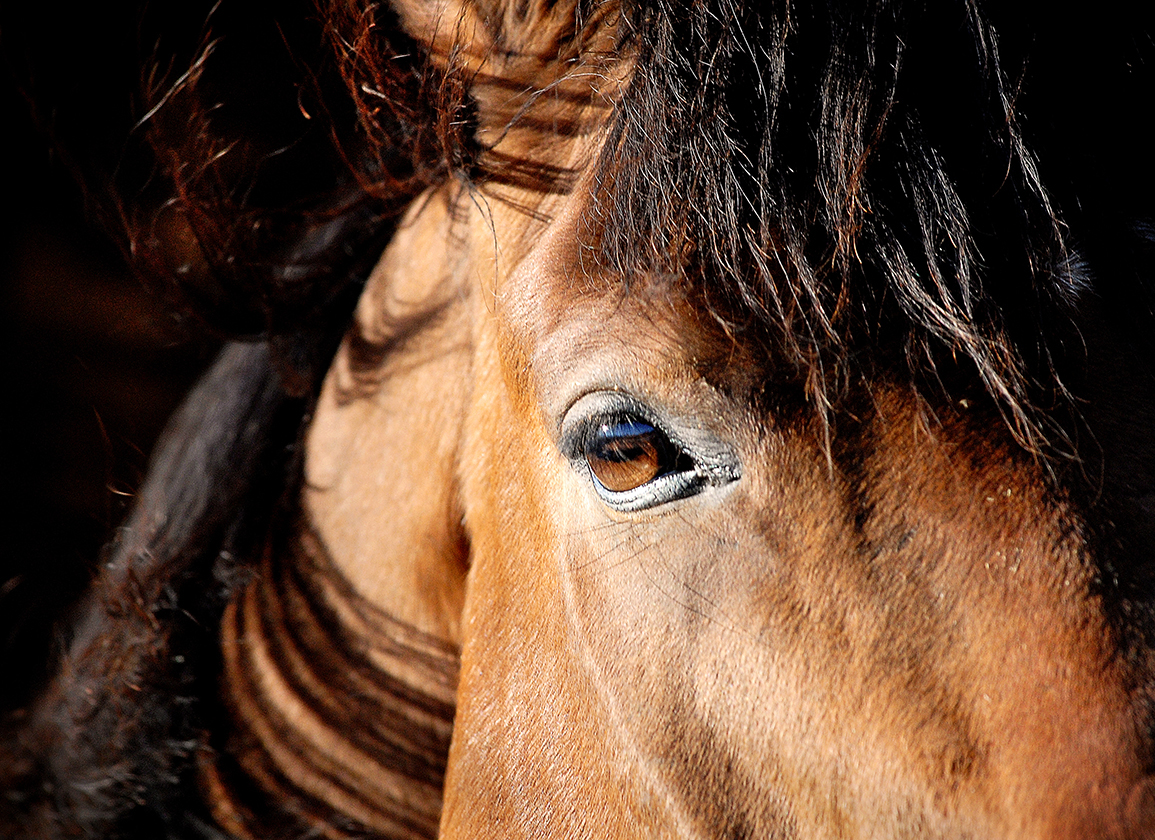 Another reason for Byrne's cautious approach to promoting his products concerns the legal maze that surrounds how CBD is sold and prescribed across the country, with some states banning the sale of certain CBD products for both human and animal use.

Indeed, according to Arthur, the team at U C Davis had to “jump through hoops” to get their CBD study approved by the FDA.

Does Arthur see a future, however, where CBD products are widely used on the backstretch? “I could certainly see a pharmaceutical with cannabidiol in it that you could actually control and measure the withdrawal time, set at an appropriate threshold or screening limit.”

In the meantime, interest in CBD is likely only to grow, said Byrne, pointing to “a name you would know in Kentucky” who voiced interest in CBD to help an 18-year-old mare who hadn't had a foal in three years.

Byrne said he explained CBD wasn't necessarily a fertility drug, but that it could be a useful tool to help reduce her nervous energy and manage inflammation issues she had been troubled with.

“They had the mare on it for about 18 days. She was bred last Thursday, and was checked prior to breeding, and had two follicles that were as big and healthy as she had had in the three years this man had taken care of her. She ovulated properly, and the vet did not need to prescribe her an anti-inflammatory,” said Byrne.

“This is a single situation,” Byrne added. “It's a long, long way from carrying a foal term. But it's interesting anecdotally.”